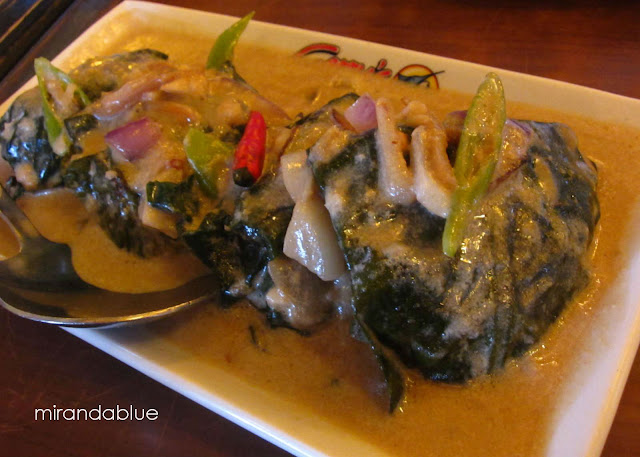 This dish was a hit to my siblings.  It's probably the hunger generating spicyness and nostalgia-inducing coconut milk.  It's called Tinomok, a bit like laing, only better, according to Gerry's Grill's website.  I know laing but it was the first time I heard of Tinomok.  It's a Bicol delicacy, and according to my brother, it's chicken wrapped in gabi leaves and cooked in coconut milk.  I believe it's basically the same as the Ilonggo's Pangat, but instead of chicken, pork or dried fish (usually labahita) is used.

Very unusual to me. I love to try new things.

Looks so rich, yummy, and drool worthy. I must look for a recipe ASAP!

I never try it Sis but sounds like a delish food to try. Visiting from Food trip Friday, hope that you can return the visit too.

my parents love it, together with bicol express haha

That Tinomok is so wonderfully presented! I'd love to try that!

instead of fish its chicken.. that's yummy! anything with coconut milk to me hehehe lalo na pag spicy :)

I've heard of Tinomok but have never tried it. will a resto that serves and we'll see. thanks for sharing!
My FTF: http://www.gastronomybyjoy.com/2012/01/is-that-upside-down-house-pan-de.html

The name doesn't sound nice but I know how good this is. Just by the coconut milk naku po hot rice please!!

Wow this is totally new to me. Mine is up and its here thanks Sahm’s Dining Diary

that looks like it's going to be a hit with me and my siblings (nope, not hubby and my kids, lol), too! haven't tried Gerry's Grill yet, but meaning to...one of these days! :)

appreciate much your sharing over at Food Friday, LM