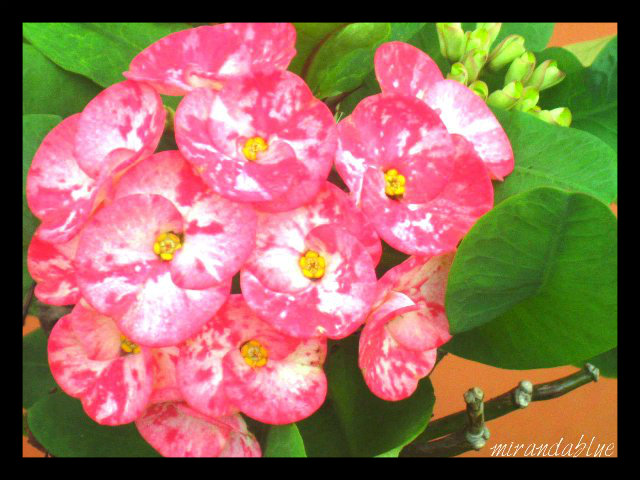 E is for Euphorbia

Consisting of 2008 species, Euphorbia is one of the largest and the most diverse genera in the plant kingdom, commonly referred to as spurges.  Eurphorbias are mostly found in tropical and sub-tropical regions of Africa and the Americas, and in temperate zones worldwide.  The botanical name Euphorbia derives from Euphorbus, the Greek physician of King Juba II of  Numidia (50-52 BC - 23 AD), who married the daughter of Anthony and Cleopatra.  He wrote that one of the cactus-like Euphorbia was a powerful laxative.  "Spurge" derives from the Middle English/Old French espurge ("to purge") due to the use of the plant's sap as a purgative.

These are  Eurphorbia milii also known as Crown of Thorns, Christ plant, a species of flowering plant in the spurge family Euphorbiaciae.   Various colors and cultivars grow all over the Philippines but it is endemic to Madagascar.  It's a succulent climbing shrub with dense spiny stems and straight slender spines of about 3 cm long with poisonous milky sap.  Legend associates it with the crown of thorns worn by Christ before his crucifixion. 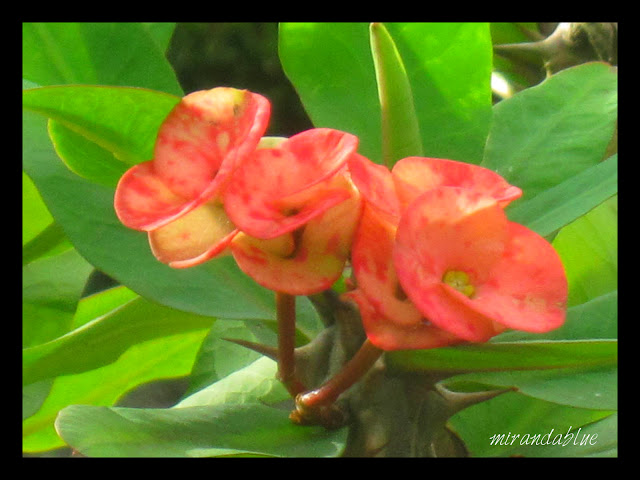 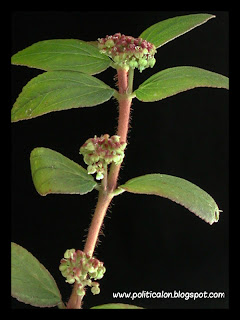 Another species of Euphorbia, locally known as tawa-tawa and gatas-gatas, (Euphorbia hirta) is believed to contain significant anti-thrombocytopenic properties that may increase platelet count of patients suffering from hemorrhagic fever like dengue.  This herb grows in grasslands and road sides all over the Philippines.  When I was a kid, we treated sore eyes with the milky sap of this plant.

A study about Euphorbia hirta conducted by Pharmacy students of  the University of Santo Tomas (UST) in Manila won the 1st prize in the 2012 Philippine National Health Research System Week.

In the study, Euphorbia hirta was found to promote cell production, and prevents platelet destruction.  Further research on  the efficacy of this plant against dengue is now being fast-tracked by the government.  Dengue is a mosquito-borne viral infection that is killing hundreds of people, mostly children, every year.  There are no specific anti-viral drugs for dengue.

The popular Poinsettia, or Euphorbia pulcherrima, belongs to the diverse spurge family of Euphorbiaciae. 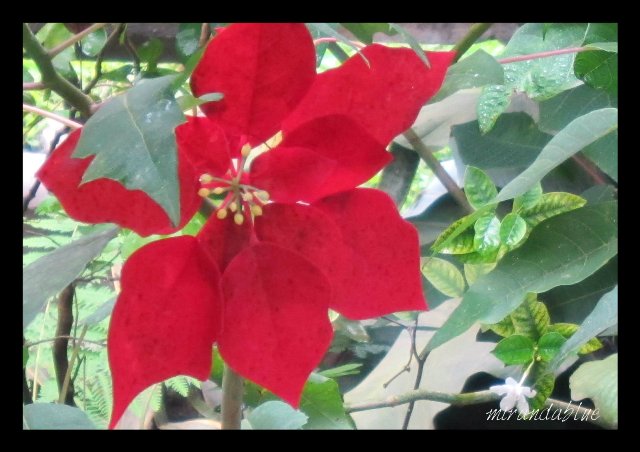 Euphorbias are tough plants and can take just about anything---both salt and drought-tolerant.  They're easy to grow, according to my aunt who used to cultivate all colors of Euphorbia milii.  I have been attracted to succulents and wanted to grow reds and two-tone Euphorbia milii but since I have a dog, I abandoned the idea. The thorns could be dangerous to pets and small children. 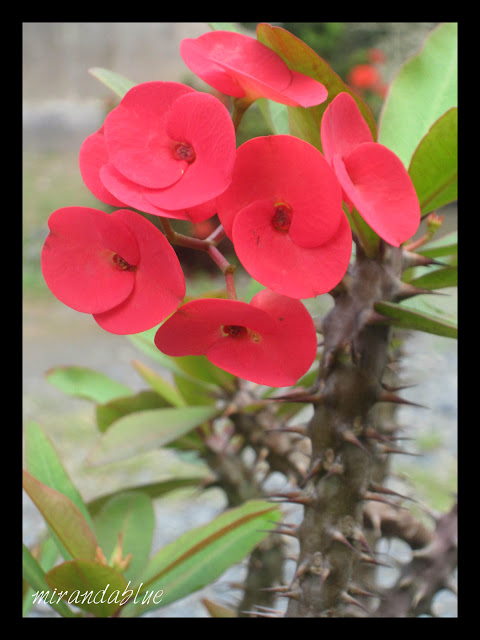 "A love that you withhold is the pain that you carry."
~ Alex Collier 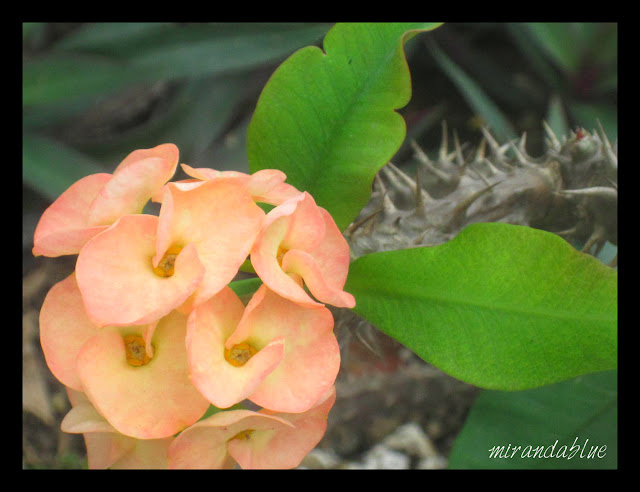 odd little flowers!! I thought the yellow centres looked familiar, then when you said these are related to poinsettias, I saw the similarity!! I think maybe I have seen crown of thorns as a houseplant...
I did not know the spines were poison!

lots of thorns on that last one. We have it too.

That no 3 growing too much in my garden, but it smells good.
Great pictures and E!

Lovely! I didn't know they come in so many colours. We usually only have reds and whites as house plants.

lots of ENTICING info re the pretty flowers

this is one educational post. i finally got to know the name of this flower.

A plant that can aid with eliminating a major disease is certainly a miracle plant! Lovely variety of colours!

Your last capture brings out the design of the petals beautifully, and I like its color!

very beautiful photography and much enjoyed ~

Full of fasinating information on Euphorbia hirta. I had to google it and there was a wealth of info. I will truly have to finish that research! Lovely photos, thanks so much!!

Take the 'b' off the name and you get something that could be apt about the plant if its medicinal properties were in full use and production soon.

What gorgeous flowers, each one a beauty! And I learned something completely new about the Euphorbia species, thank you:)

Beautiful blooms!
I remember my mother used to grow Crown of Thorns in a pot so she could move it inside in cold weather. It's an interesting plant, but too many thorns for me. My mother also like cacti, but I don't grow them, either.
Have a wonderful day!
Lea
Lea's Menagerie

Thanks for this lesson, my grandpa grew, but it never bloomed.

All of them are beautiful!

Catching up with ABC Wednesday entries on Valentine's day!

I hope you'd come and check out my Eskimo

The red ones here look plain to me now.