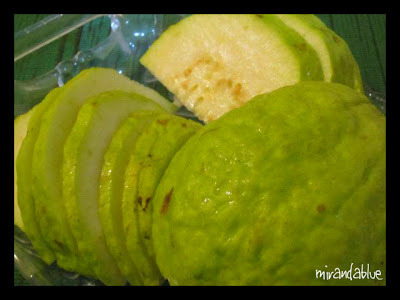 G is for Guava


Guava is a tropical fruit native to Central America and northern South America.  It belongs to the Myrtle family, genus Psidium (or pomegranate) with about 100 species of tropical shrubs and small trees.  It is known as Goiaba in Portuguese and Guayaba in Spanish.  Guava fruit is often bitter when unripe, soft and sweet when ripe---tastes something between a pear and strawberry, tangy with a citrus flavor.    The fruit is usually green before maturity, but becomes yellow, maroon or light green when ripe.

Guava is one of my favorite fruits, and one of the first trees I climbed when I was a kid.  There were a couple of guava trees in our yard and I virtually lived on guava trees--my grandfather called me a guava-eating bat.

The guava in our yard has small fruits, about the size of a lemon, and has a distinct aroma when it ripened.  The pulp also turned red when the fruit was ripe.  It's the kind of guava that is used as a souring agent in sinigang, a popular Filipino soup dish.

Guavas produce fruits all-year round.  My mother used to cook ripe guavas in sugar and coconut milk---it was my father's favorite dessert.

There  is  a  fruit  stand  a few blocks from my apartment  selling guapple, or  Apple Guava---I buy 2 kilos every 3 to 4 days.  From  cookies, chips and  chocolates, I've switched to guapple, a  healthier snack.  Guapple is an extra-large variety--a fruit weighs about 500 grams, about  5 to 6 inches long  It has a thick and white-fleshed fruit, and the crunchiness of an apple.

Guavas  are  a  good  source of  Vitamin C  and A,  dietary  fiber,  folic acid, potassium,  copper  and manganese.  It has a low calorie profile, and a  single guava fruit contains about four times  the amount of Vitamin C of an orange.  Fruits are usually eaten raw, ripe fruits can be processed to jelly, wine and jam preserves. 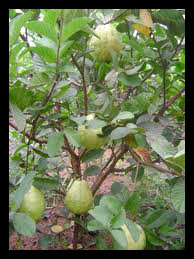 Guava leaves have been used in folk medicine for as long as I can remember.  Decoction of leaves in water is a good  cure  for  diarrhea---my mother still treats my dog with this concoction when he has the runs.  It  is  also used as an astringent,  mouthwash  for  swollen gums,  reduces fever and anti-spasmodic.  Bark  and  leaves  are  used  in  childbirth  to expel  the placenta.  The bark is recommended in making complex cosmetics.  Young tender leaves chewed or crushed applied to tooth cavity acts as eugenol for toothaches.

But there's  one use  of  guava  leaves  that would make  you shudder.  In  far-flung areas of the country where traditional circumcision  method is  still  being  practiced,  pre-adolescent boys who undergo this procedure are given  guava leaves  to  chew  on to  distract them from the pain.   The  chewed  guava  leaves  is  applied to the cut foreskin with the dressing.  It is believed that guava leaves  have  antiseptic and  anti-hemorrhagic  properties. I  remember over-hearing  my  brothers  and male cousins  talking  about  some  boy  we  knew  in  childhood who swallowed the chewed guava leaves instead of spitting it out in the middle of traditional circumcision.  Poor boy!  But I couldn't help but laugh at the thought!  I hope I wouldn't run into the guy in one of our elementary school reunions.:p 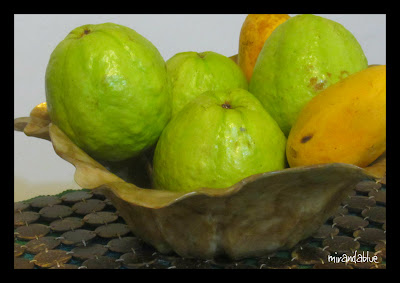 my favorite. when i was growing up our summers were spent outside playing with other kids. when hungry, we don't go home to get food, we just go to the backyard, ours or our neighbor's to get some guava.

by early evening, the same neighbor would be bringing us "postre" guava dessert, you know this? guava cooked in coconut milk? so much guava, so good.

Very interesting post. I've enjoyed a guava flavored beverage while we were traveling.

sounds healthy. don't think I've ever had it.

I really love guava, both the fruit and the juice. Yummm.
I didn't know they were part of the myrtle family.

One of my favorite fruits! We ate them with plum powder.

You certainly know a lot about GUAVAS! Not common in the Midwest but I know that they're GOOD and very tasty! Kate, ABC Team

Guava reminds me of my childhood, I used to get in trouble after school because I would picked guavas before returning home lol.

My favorite fruit! We used to pick them in the mountains in my childhood, they grew everywhere!:) Guava jelly is something that takes me straight down memory lane.

I have never tasted this fruits. And I'm not sure whether it can be bought here. I will chack that

I remember my mama used to make guava jelly! Yummy!

P.S. Luna, I was able to back up my posts thru May 2011, and they are there including the comments, except that the photos are not attached to the posts. So I still have to upload them.

one of my favorite fruits. when i was pregnant with my youngest child, i buy guava everytime i pass by the Baclaran church. Now, i don't buy as much, maybe because i'm not naglilihi anymore. i miss the days when i can just pick guavas up from the trees in the backyard.

It is power packed fruit.
Good to know more about this.