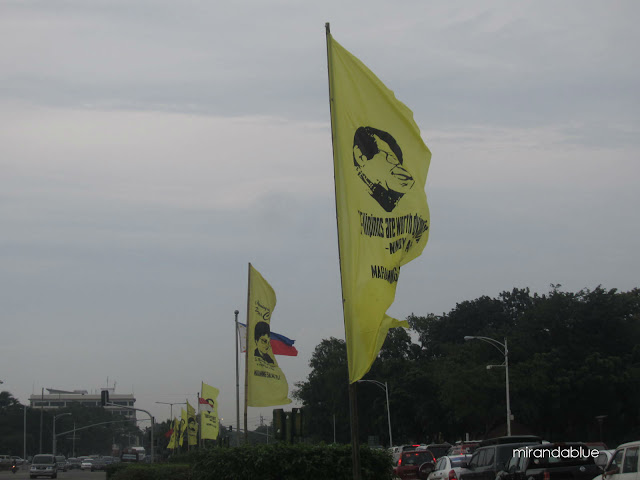 Yellow banners along Roxas Boulevard to commemorate Ninoy Aquino's assassination on August 21st.  Printed on these banners is "Filipinos are worth dying for" but what Ninoy Aquino actually said was "The Filipino is worth dying for."

Inspired by the song "Tie a Yellow Ribbon Round the Old Oak Tree", allies of Ninoy Aquino tied yellow ribbons around Metro Manila in August 1983 when the former senator was returning home to the Philippines from the US after years of exile.  The gesture was to show support, and as a sign that they still believed in him as a leader to oppose the Marcos dictatorship.  After Ninoy's assassination on August 21, yellow was adopted by the opposition as their color.

I remember that awful day. I can still picture him laying on the tarmac wearing white shirt and white pants.

Either way it is sad.

I'd never forget that day. Have a fabulous week.

the missing "the" makes for a big difference on the phrase eh? :D great flags!

sad to say their kids don't have the same beliefs like their ancestors. oh well, everyone has their own views. he is still wel remembered. hope you could visit my mellow yellow monday here: http://www.jollytoes.com/2012/08/05/the-yellow-cabs-in-new-york-city-and-sephora-building/

Very nice entry for MYM!
Thanks for sharing;o)