Consisting of around 300 genera and 7,500 species, Euphorbia, sometimes known as spurges, is one of the most diverse genera in the plant kingdom.  This specie of Euphorbia is a native of Madagascar, and widely cultivated in the Philippines.  A few years ago, there was a craze of collecting Euphorbias in every color. My aunt and her friends traveled all over looking for Euphorbias. 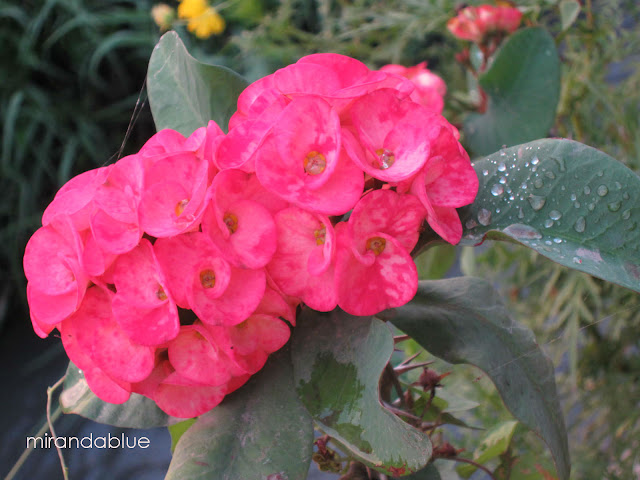 Popularly used in South Brazil with "dragon's blood", the red latex from Christ's Crown of Thorns is used as treatment for warts.  In Chinese folk medicine, Euphorbia compounds are used in cancer treatment.
In a study of 41 plants tested against E. Coli, Shigella spp (a bacteria that causes dysentery) and Vibrios spp (a bacteria causes foodborne disease) among others, Euphorbia milli was one of the 28 that showed anti-bacterial activity.  Dry flower powder of Euphorbia milli was found to have 100% total inhibition of Aspergillus (a fungi, mold species).  The crude latex of Euphorbia milli is a potent plant molluscicide (pesticides against molluscs to control snails, slugs)  and a promising alternative to synthetic molluscicide used in schistosomiasis (also known as snail fever, a chronic parasitic disease) control. 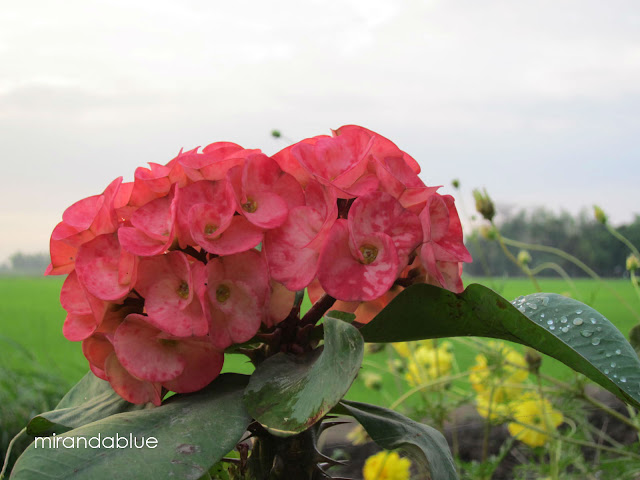 The Crown of Thorns is such a delightful shade of pink! Love the touch rain droplets on the leaves! Beautiful photos!

I love your crown of thorn photos! The way that the water beads up on the leaves is really interesting and pretty too :)

Calling by as another Floral Friday Foto participant, what beautiful compositions.

They're beautiful -- I can see how they could become an obsession.

Lovely red flowers.
I wonder why did you leave your link in the comment and not in the Macro Flowers Saturday list?
Do you have problems linking up?

Thank you for participating in Floral Friday Fotos!

Beautiful shots and wonderful info as always!
I love the perspective you achieved in the last one.

how good if it can cure cancer.

Fabulous flower to choose for this weekend. You photos are stunning.

Hi Luna, I have chosen your blog for the Liebster Blog Award:

Crown of thorns is more of a crown of glory. Beautiful!

Euphorbias may be varied, beautiful and useful, but if the sap gets in your eyes or even on your skin, watch out! I don't use them in the garden for that reason. But so pretty!

I love Euphorbia too. You captured them well!