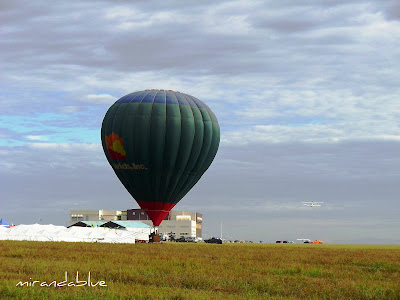 H is for Hot Air Balloon


I didn't remember I have photos for "H" in my archives until I saw hot air balloons on TV about an hour ago.  These were taken in February last year at the Hot Air Balloon Festival in Clark Field.

According to Wiki, hot air balloon is the oldest successful human-carrying flight technology.  It is in a class of aircraft known as balloon aircraft.  Unmanned hot air balloons are popular in Chinese history.  Airborne lanterns were used by the Chinese for military signalling as early as 220-280 AD.  The first tethered manned balloon flight was made in France in  1873. 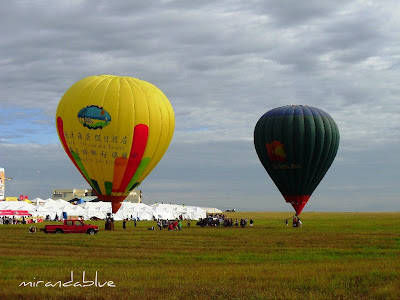 Modern hot air balloons with an on-board heat source were pioneered by Paul Edward Yost, referred to as the Father of Modern Day Hot Air Balloon, in the 1950's.  His first successful flight was in October 1960.

Vijaypat Singhania set the world altitude record for the highest hot air balloon flight on November 26, 2005, reaching 21,027 meters.  He took off from downtown Mumbai and landed 240 km south in Panchale.

The longest flight in a hot air balloon was accomplished on January 15, 1991 by the Virgin Pacific Flyer balloon manned by Per Lindstrand and Richard Branson---they flew 7,671.91 km from Japan to Northern Canada. 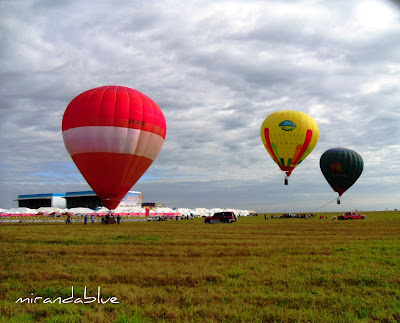 " For once you have tasted flight, you will walk the earth with your eyes turned skywards, for there you have been and there you will long to return." ~ Leonardo Da Vinci

Posted by Unknown at Wednesday, September 05, 2012

I would love to attend one of these festivals someday. I could use up a ton of memory card :)

We used to have a hot air balloon festival around here, but it stopped several years ago (probably due to insurance costs). I would love to see one again.

We have hot air festivals and I love them. Great post!

let's hear it for the photo archives!

Very colorful balloons, different world all together up there.

Da Vinci genius. You would think he addressed hot air balloon fliers right in front of him.

Very nice captures and great choice for H day!
Thanks for sharing;o)

Great idea on archive re-usage, you're giving me ideas! I am not one to be afraid of much, but hot air balloons are one of them. I don't trust that they will stay afloat or are able to be maneuvered at will. Probably time to face my fear and just try it! Thanks for the post.

They're beautiful to look at up high.

Hygiene, your comment will be highly appreciated.
Have a great Wednesday

Ah! I do love to watch hot air balloons going up, coming down and flying over.

I love to see hot air balloons. My favorite parts of a festival are mass ascensions and evening glows. The balloons are just so pretty. I'd never want to ride in one, though, because I'm terrified of heights!

Nice seeing those hot air ballons from our homecountry. I wish to try that one day.

Great information and beautiful shots. I always think of The Wizard of OZ when I see hot air balloons....