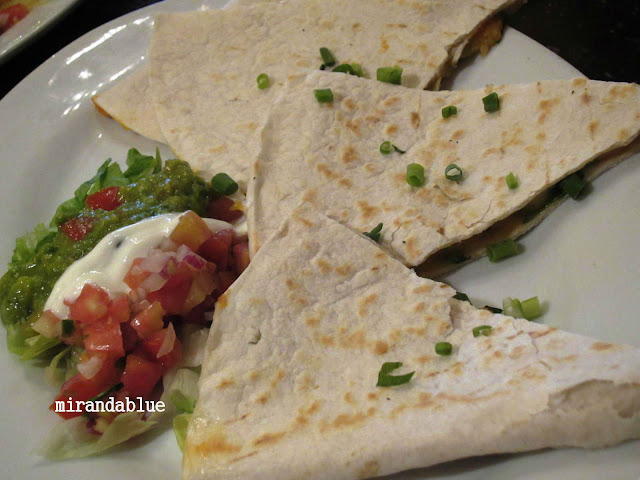 Q is for Quesadilla


This was an afternoon snack I shared with a girlfriend at  Agave, a Mexican cantina,  a couple of weeks ago.  Quesadilla was first concocted in Mexico, and the name was derived from the Spanish word queso (cheese).  It is made of flour or corn tortilla filled with savory mixture containing cheese and other ingredients such as cooked meat, refried beans, avocado,  other vegetables may be added.  The filled tortilla is then toasted or fried, usually until the cheese is melted, folded in half to form a half-moon shape.   Crisp on the outside, stuffed on the inside with Mexican cheese and Ranchero sauce.  Served with sour cream, guacamole and pico de gallo.  Yummy!

Linking to ABC Wednesday
Posted by Unknown at Tuesday, May 08, 2012

I love those so your post is making me hungry. Carver, ABC Wed. Team

i love these. i used to make them at home for dinner, my version of ham and cheese quesadilla with salsa and beer. tsalap.

I love quesadillas and order them freQuently when out at a restaurant.

Great Q! It looks quite yummy.
Have a great week!
Wil, ABC Team.

my kids love eating these.

When I'm hungry and don't know what else to eat, I usually fix a Quesadilla
Its a yummy and satisfying snack or meal.

I could lick the screen!!!
Jane x

One of hubby's favorite mexican dishes.

Thanks for taking the Dementia Quiz
Rose, ABC Wednesday Team

Quite delicious!! I love quesadillas!

I love quesadillas too - a great choice for letter Q week!