A blue truck cruising at the SCTEx (Subic-Clark-Tarlac Expressway). SCTEx is a 94-kilometer four-lane expressway north of Manila.  The south end of this expressway is at the Subic Bay Freeport Zone, a former US naval base; it passes through Clark Special Economic Zone in Angeles City, a former US air force base, and the north end is Tarlac City, the hometown of the current president. 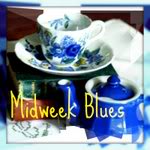 Linked to Midweek Blues
Posted by Unknown at Wednesday, May 25, 2011

Interesting. I wonder what he has in the truck bed. Something like barrels?

Great colors in this shot and they all blend so perfectly with the blue truck. Looks like he's transporting beer or something :D

A beautiful roadway. I often wonder about trucks like these. What they have and where they go.

I do not think I have ever seen a truck that color blue.
I am a new visitor and follower...I am enjoying your photo's.