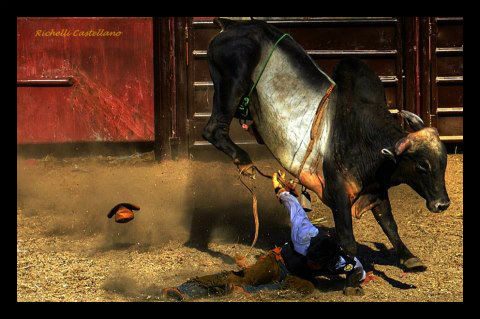 R is for Rodeo

For most people, a cowboy is a distinctly all-American symbol.  The wild, wild west comes to mind with Doc Holliday and the gunfight at the O.K. Corral, Billy the Kid and Wyatt Earp; John Wayne riding into the sunset, and yes, my teenage crush, the Marlboro Man looking out into the distance.

The rodeo was not originally a sporting event but an integral part of cattle-ranching in areas of Spanish influence.  Rodeo stresses its western folk hero image and its being a genuinely American creation.  But in fact, it grew out of the practices of Spanish ranchers and their Mexican ranch hands (vaqueros), a mixture of cattle wrangling and bull fighting that dates back to the 16th century conquistadors. source

Today, rodeo is a sporting event that involves horses and livestock, designed to test the skill and speed of a cowboy or cowgirl athletes.

Like cowboys, a rodeo seems out of place in the Philippine setting.  An image of a farmer on a carabao (water buffalo) is probably a more identifiable Filipino icon than a cowboy on a bucking horse.  But with our strong Spanish influences, it's not far-fetched that the rodeo has been practiced here since the Spanish regime.

And as far as I can remember, our homegrown cowboys have been competing in local rodeos since I was a kid.  Back in the day, watching a rodeo was one of the highlights of our summer vacation in my hometown.  The rodeos of my childhood were held in an open field in one of the haciendas and were participated by farm workers from nearby haciendas.

Although not a popular sport here, the rodeo reached the mainstream Filipino consciousness since the Masbate Rodeo Festival started in the early 90's.  It was conceived by ranchers and businessmen of Masbate to uplift the local cattle industry.  With about 30 ranches and a cattle population of approximately 54,000, Masbate is the Cattle Country of the Philippines.  In April, teams consisting of four hundred cowboys from universities across the country competed in the rodeo.

Masbate, an island province, is about 426 kilometers from Manila, approximately 230 nautical miles; or about 50 minutes by plane.  The province has been declared the Rodeo Capital of the Philippines, and became known as the Rodeo Capital of Asia and is now affiliated with the Professional Rodeo Cowboys Association of America. 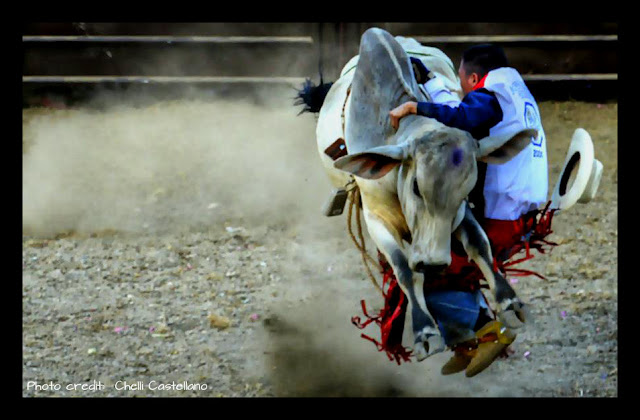 Friends from FUNtastic Philippines were at the Masbate Rodeo Festival last April and Chelli Castellano was kind enough to let me borrow her photos.  I promised myself not to miss this festival next year.

Fascinating. I would have never put Rodeos and your culture together, but it certainly makes sense.
Great post for ABC Wednesday.

and a GREAT Copland piece is 'Rodeo'

this series is very interesting.

Love the series of action shots (and completely agree with Roger on Copland's "Rodeo"!:)

Our annual local rodeo is coming up soon - it's always a big hit.

that's an interesting potted history of something I knew very little about - now how can I get that into the conversation at this morning's coffee morning?

I love this post. I know something new. I had no idea that rodeo would be part of your culture. It makes sense though given the Spanish influences.

Great word choice I definitely learned something! I have never seen a rodeo beautiful photographs

Looks painful. Its so interesting to see how some sports translate to other countries.