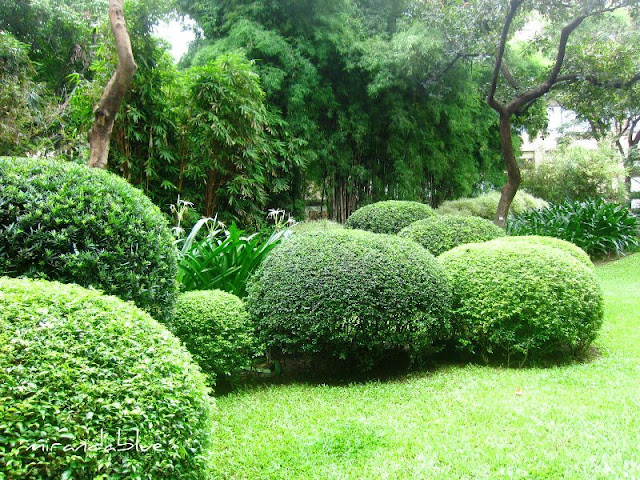 T is for Topiary


I didn't see Edward Scissorhands around here but I admire the gardener who has a natural gift for topiary art.   These topiaries are part of the Zen-like gardens near the lagoon and chapel at Greenbelt Park, a park in the middle of a mall complex.  Topiaries are not as popular in the Philippines compared to other Asian countries that I'm always delighted to see them.


Topiary is the horticultural practice of training live  perennial plants by clipping the foliage and twigs of trees, shrubs to develop and maintain clearly defined shapes, perhaps geometric or fanciful; the term also refers to plants which have been shaped in this way. As an art form, it is a type of living sculpture. The word derives from the Latin word for an ornamental landscape gardener, topiarius, a creator of topia or "places", a Greek word that Romans also applied to fictive indoor landscapes executed in fresco. No doubt the use of a Greek word betokens the art's origins in the Hellenistic world that was influenced by Persia, for neither Classical Greece nor Republican Rome developed any sophisticated tradition of artful pleasure grounds. 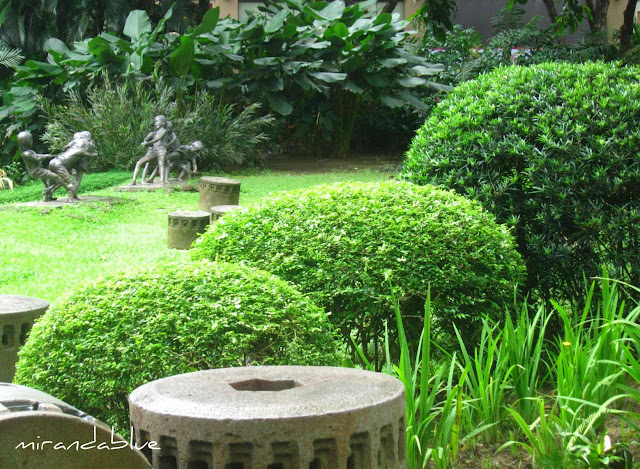 The clipping and shaping of shrubs and trees in China and Japan have been practiced with equal rigor, but for different reasons. The goal is to achieve an artful expression of the "natural" form of aged pines, given character by the forces of wind and weather. Their most concentrated expressions are in the related arts of Chinese penjing and Japanese bonsai.


Japanese cloud-pruning is closest to the European art: the cloud-like forms of clipped growth are designed to be best appreciated after a fall of snow. Japanese Zen gardens  (karesansui, dry rock gardens) make extensive use of Karikomi (a topiary technique of clipping shrubs and trees into large curved shapes or sculptures) and Hako-zukuri (shrubs clipped into boxes and straight lines).  Wiki source 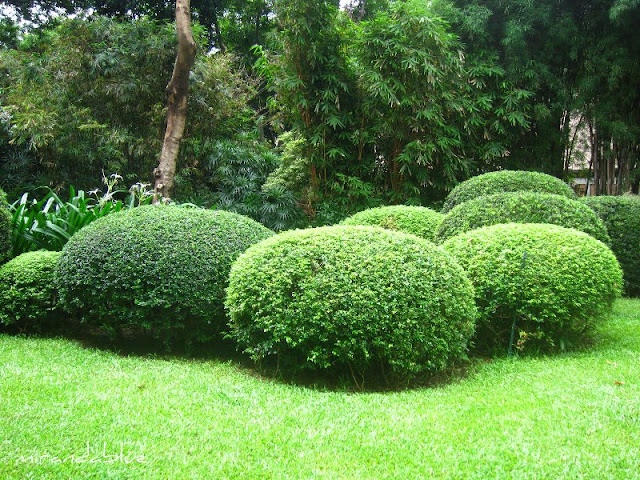 All those perfectly round bushes make me laugh for some reason. I guess it's someone's need for such control over something natural that tickles me.

something I like to see, but wouldn't want to DO.

I'm sure their care never ends. The results are gorgeous though.
Ann

It's a lot of work for a gardener to keep these bushes in these shapes. A neighbour of mine has one in her front garden.
Great post for the letter T !
Wil, ABC Team.

The trees and bushes can look so lovely. It takes a very artistic person to do such work.

It takes a special Talent to do topiary. There's one of a bear in a local park around here that's absolutely phenomenal.

I love this! I am shaping an olive tree like a ball on top, it's a lot of fun (it's a small one)

Looks like its a beautiful park and you have captured it well.

the shaping really takes time for this but the result is amazing!

Somehow it has a calming effect on me. Sofitel Huahin (my neighborhood) is big on topiary in their garden. I like the art so I remember it even if it was like 15 years ago.

What an interesting and informative post! All that beautiful, vibrant green is a bit of a shock to my eyes, which have grown used to the monochrome of our snowy landscape.

I love the term "cloud-pruning," which I'd never heard of before. These well-groomed plants are lovely to behold, but I'd probably find all the trimming required to be tedious rather than Zen-like, which may be part of why I prefer a wild and natural look in my own landscape. :-) But I appreciate the time, talent and patience it required to transform a topiary. Thanks for the fun post and lovely photos!

I love landscaping and gardens so your post really made me smile. Thanks for sharing.
Laurie @ Pride in Photos

I like that plant on yr cover photo. We used to press it in a thick book.

Oh I never knew the process of trimming till today. They look very refreshing.

Catching up with all the T entries.

great post - I've known about topiary for many years, but never THAT much! thanks for sharing ~