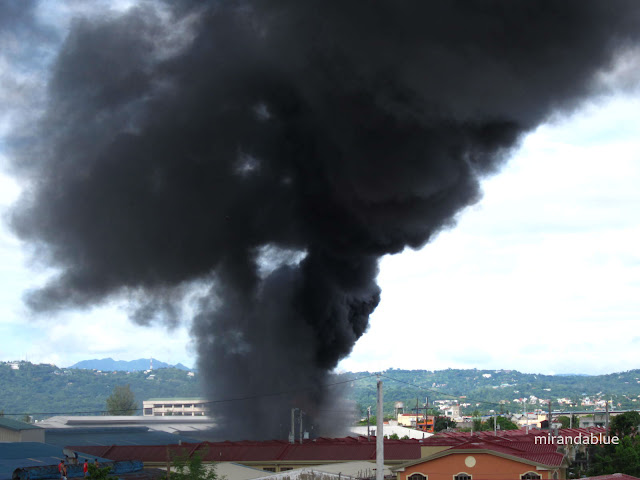 A is for Arson

My quiet afternoon was disrupted by an acrid smell of burning rubber.  When I looked out the window, I was greeted by this hellish spectacle.  A neighbor said that the burning building is a plastic pipe factory.  The fumes and explosions were scary.  I wondered if this was an accidental fire or arson.

Arson is the crime of intentionally or maliciously lighting structures, wildland areas,  cars or other property on fire.  It may be distinguished from other causes such as spontaneous combustion and natural wildfires.  Arson often involves fires deliberately set to the property of another or to one's own property as to collect insurance compensation.

Pyromania is distinct from arson.  Pyromaniacs start fires to induce euphoria; it is an impulse control disorder.

We don't know if this fire was an arson.   Fortunately, it was declared fire out after almost 3 hours and nobody was injured.

Arson REALLY irritates me. It is so selfish, it puts firefighters' lives in danger... grrr.
ROG, ABC Wednesday team

...and the smell must have been ABOMINABLE! Glad no one was hurt.

Wow, that's a frightening site. I'm glad they got it out before too long. Carver, ABC Wed Team

That is a scary sight...

Hmmmm hope it is not arson for insurance? Who knows! ^_^

I so agree with Roger. Arson is SO wrong...absolutely selfish.. Glad no one was hurt in the fire you reported in your A blog. Arson is a Bad Word, but a good one for the beginning of the Round.

Good to know that no one was hurt in that fire, kudos to the firemen!

Glad to know that no one was injured

Fire is a scariest thing!

Let's hope that this fire was not an arson but simply an accident. And fortunately no one is dead or injured. Have a quiet and happy weekend!